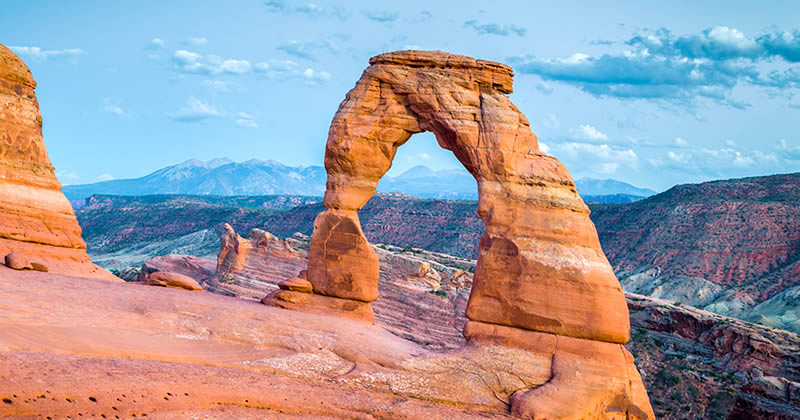 The Mighty Arch, Part 1: A Natural Cure for Plantar Fasciitis?

Be sure to check out the second part of this series:
The Mighty Arch, Part 2: Strengthen Your Arches to Treat and Prevent Foot Pain

I consider myself to be very lucky.

I began working at Softstar right around the time I developed a sharp and persistent pain the arch of my foot, later identified as plantar fasciitis. After learning that my father and many of my friends suffered from this same condition, I was told that all I could really do for treatment was to buy expensive orthotic arch support inserts that I would have to wear the rest of my life. This was the advice from podiatrists with decades of experience who claimed that feet need shoes with as much cushioning, support and controlled movement as possible. I tried these inserts and found that while they lessened the pain, it never really went away. I also learned that plantar fasciitis pain often only gets worse with time, and thicker and more expensive inserts were in my future.

Here's where the luck came in: I just happened to have a new job at one of the only companies in the country that makes barefoot shoes without any arch support whatsoever. I knew very little about the benefits of bare feet at the time and was just starting to pick up tidbits of information around the workshop. One night at home, I had an epiphany when I realized that my arches felt much better when I walked around barefoot. On a whim, I decided to start going barefoot at work (yes, this is common at the Softstar workshop—hence, more luck for me). I also realized that wearing Softstars had the same effect and bought my first pair. It took about a week for my pain to disappear completely and another three weeks for me to replace all my old shoes with Softstars. Two years later, I'm still pain free. And guess what: none of my Softstar coworkers suffer from plantar fasciitis. 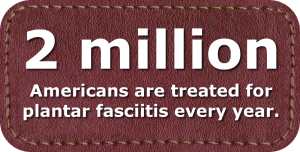 The explanation from the barefoot/minimalist shoe community is that arch supports act as a crutch that prevent you from flexing and strengthening your arch muscles properly. Therefore, arch supports used to treat plantar fasciitis are basically lessening pain by preventing you from using those muscles, with the result that they never heal and become weaker and more susceptible to further injury over time. By going barefoot or wearing shoes without arch support, I was able to strengthen my arch muscles and recover. That all made sense to me, but it was also just a bunch of rumors from people who had no medical expertise whatsoever... until now.

We recently made the acquaintance of Dr. Ray McClanahan in Portland, Oregon. Dr. McClanahan is a podiatrist who believes that most foot problems can be corrected by restoring natural foot function (i.e. barefoot movement). I was excited to learn that he had already been recommending Softstars to his patients, and even more excited to find that he wrote an article on this very subject of arch support, appropriately titled "Arch Support."

I'm now happy to share with you his original article, which we hope you'll find educational and insightful. If you ever wondered why Softstar's shoes don't use arch supports, here's your answer. And if you ever come across footwear that has arch supports and claims to be a "barefoot shoe," you'll know they're full of hogwash.

A little disclaimer first: I don't claim that going barefoot is a miracle cure for plantar fasciitis. My case was likely not as intense as people who have had it for years, and we all know that transitioning to barefoot shoes too quickly can have negative effects. We at Softstar are shoemakers, not doctors, so check with a medical professional before making such a change (hopefully one who supports natural foot function). —Elf Martin

Since much of the current treatment for foot and ankle disorders is centered on supporting the arch, we thought it would be helpful to discuss what arch support really means and discuss whether it is necessary or desired in the active foot.

In order to understand the treatment of rendering an arch support, one must understand the architectural principle of an arch, and liken that principle to the multitude of arches that naturally occur in the human foot. When you study the structure of the foot and the shapes of the bones of the foot, you quickly realize that most of the weightbearing bones of the foot are indeed arches themselves by being shaped to have support ends at either end of the bone and an open space or boney arch in between the support ends of the bones.  For the purposes of the current discussion, we will concentrate on what might be considered one of the primary arches of the foot, sometimes called the medial (inside of the foot) longitudinal arch, the arch that spans between the rearfoot or heel bone and the forefoot or ball of the foot and toes. 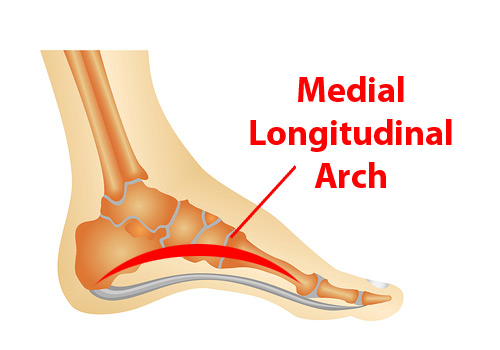 Webster’s dictionary defines an arch as “a curved structure that supports the weight of material over an open space.”

Said another way, an arch is a structure that is able to support weight over an open space, by providing support on either end of that open space.

Applying this logical definition to the arches of the foot necessitates support on either end of the arch, and is exactly the opposite of the type of “arch support” that is available to consumers, either over the counter (i.e. Dr. Scholl’s or similar product), or from their healthcare professional (footbed, arch support, orthotic). These products attempt to “support” the arch, not by supporting the ends of the foot arch, but rather by lifting up under the open space of the foot arch. This does not make sense.

As was mentioned above, current commercially available “arch supports” (which, by the way, are packaged under a number of names – arch support, footbed, orthotic, etc.) push up under the open space of the foot arch and not up under the ends. Many people feel a positive influence on their posture and walking comfort when wearing the current type of arch support, but this is not because they have a problem foot, but rather, because nearly all footwear that is available to today’s consumer expects the wearer to function well while walking on a ramp (the heel is elevated higher than the forefoot) with their toes bunched together (from tapering toeboxes) and the toes held above the supporting surface by footwear industry standard toespring, which is the elevation of the ends of the toes above the ball of the foot (the metatarsophalangeal joints).

But wait, didn’t we just confirm that in order for the arch of the foot to be supported, we need to support the ends, and not the middle, or open space?  Indeed we did, and as you can see from the description above, current footwear available to consumers is improperly positioning the support ends of the arch, by elevating the heel, which is one end of the arch, and unnaturally pinching the toes and holding them above the ball of the foot (metatarsophalangeal joints), which is the other end of the foot arch.

Individuals who grow up barefoot, naturally have the support they need for both ends of their foot arch, and this is likely part of the reason why their foot arches function perfectly throughout their lifetimes, and their feet do not break down, unlike 80% of Americans who by nature of their habitual shoe wearing and compromised arches, will suffer some form of foot problem at some point in their lives.

This is not to suggest that we should all ditch our shoes and begin walking around barefoot, but it does suggest that our shoes are made improperly and are the cause of the arch problems and the associated deformities that many Americans experience.

Although there is scientific evidence that spending time barefoot is exactly what our weak arches need, the reason why it would not be a good idea for most Americans, is because much of our immediate environment is not compatible with our thin, moist skin and weak arches. We live in a world of cement and asphalt and multitudes of sharp materials, such as glass, that can become imbedded into our skin. Interestingly, the skin of the feet becomes thickened and resistant with prolonged exposure to hard objects such as gravel, cement and asphalt. Unfortunately, most Americans will never experience this hypertrophying and strengthening of the skin and arches of the foot, which is taken for granted in many developing countries, where all out sprinting over sharp rocks causes neither pain, nor injury.

What is suggested and recommended is that we make shoes that meet the need for protection of the skin of the feet, and that shoe manufacturers do not presuppose that the fashionable design features of heel elevation, tapering toeboxes, and toespring, are without significant deforming consequences.

In conclusion, the most likely reason for needing arch support is because today’s footwear removes the structural integrity of the foot arch by altering the support ends in favor of supporting the open end, which is no longer an arch support, but an open space support.

You can see our follow-up post here: The Mighty Arch, Part 2: Strengthen Your Arches to Treat and Prevent Foot Pain

About Dr. Ray McClanahan: Dr. Ray's practice, Northwest Foot & Ankle in Portland, Oregon, allows him to care for those who find their highest joy when in motion.  In his 17 years as a podiatrist, he has learned that most foot problems can be corrected by restoring natural foot function.  He is also the inventor of Correct Toes, silicone toe spacers. His professional goal is to provide quality natural foot health services with an emphasis on sports medicine, preventative and conservative options as well as education on proper footwear.

Improving Your Balance as You Age
Best Waldorf and Montessori Classroom Shoes
Pregnancy and Your Feet: Swelling, Growth, and Foot Care Tips