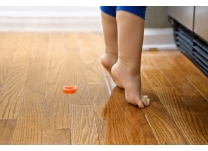 Should You Worry If Your Child is a Toe Walker? 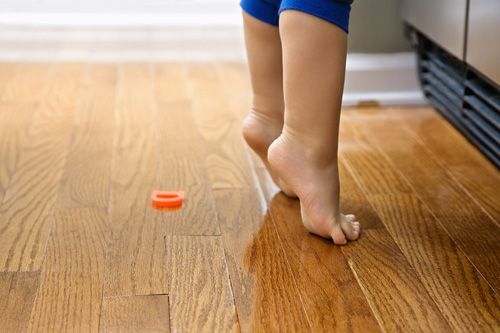 Does your child walk on his or her toes?

Toe walking in babies and young children is very common, but prolonged toe walking often concerns parents who fear it may be symptomatic of other developmental problems. While it is recommended to refer to the advice of your doctor, a new study sheds some reassuring light on the subject.

Toe walking is just what it sounds like: walking on the balls of the feet and keeping the heels in the air. We see a lot of babies doing this in our workshop when they first learn to walk, and most stop after a few months. For some children, however, toe walking may continue for much longer and parents often wonder why. A Swedish study1 published in the August 2012 edition of Pediatrics magazine explored this topic by analyzing the walking patterns of 1,400 children.

It turns out that toe walking is common among healthy children. About 5% of children will toe walk at some time, especially under the age of three. Even at older ages many preschoolers still continue the practice and most—about half—will stop doing so on their own by age 5½. Those that continue past that age tend to do so only about 25% of the time, often out of habit.

The study did show a prevalence of toe walking among children with certain cognitive disorders, but experts say those cases also showed many other symptoms and toe walking by itself is common enough that parents should not see it as a reason for alarm. Often, children learn to toe walk from spending too much time in a baby walker during key developmental stages. Other times, it can be caused by a short or tight Achilles tendon, which makes it difficult to lower the heel while taking steps. There also appears to be a hereditary connection, as 70% of toe walkers come from families that include another relative who toe walked at some time.

Many pediatricians say toe walking is a normal part of development that will usually resolve itself in time. If it continues into older ages, concerned parents may want to seek a doctor's opinion and will often be taught stretching exercises or similar treatments to help their child loosen Achilles muscles and improve posture. One thing is certain: toe walking should not cause alarm or excessive worry—healthy kids do it a lot.

2019 Movement and Shoemaking Workshop with Katy Bowman
Pregnancy and Your Feet: Swelling, Growth, and Foot Care Tips
How Strong Are Your Ankles? This Simple Test Will Tell You

Tags: infant, child, toe walking, toddler, doctor, worry & study
Back to Blog
Blog Archive
Categories
About Softstar
Learn more about the Elves, our company and the shoes we make for healthy feet!
Email Updates
Follow Us
or
Continue with Google
Continue with Facebook